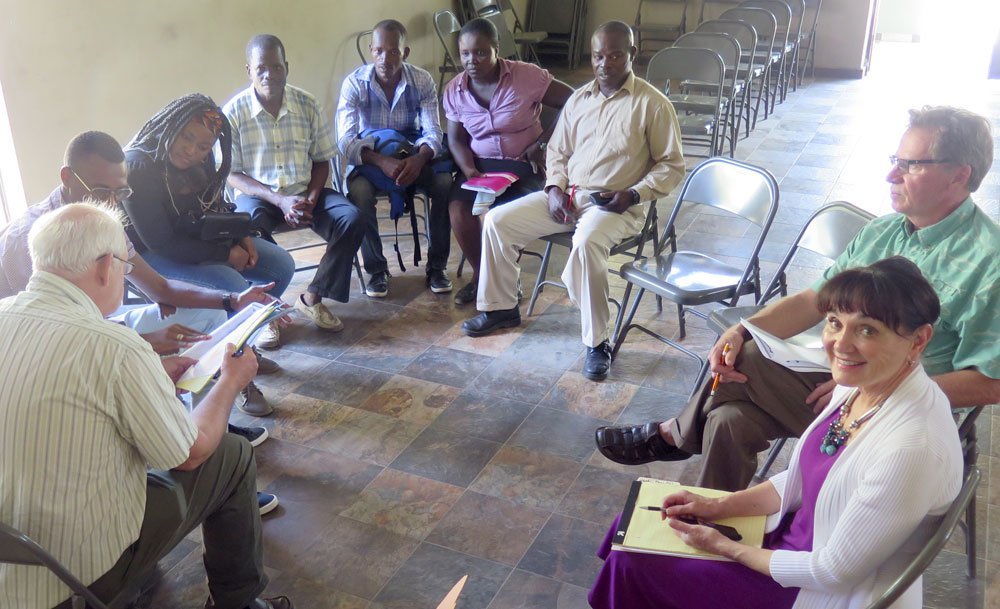 In November 2019, Hope for Haitians in-country partner Dadjena Joseph and our partners with the Faith Project organized a meeting with the nine-member Viard Leadership Council to discuss impact of the Leadership Training conducted by Hope for Haitians and assess progress on the Poultry Project. Of the nine Council members, three are women, which was a minimum requirement for establishing the Council. Seven of the nine members are schoolteachers, one is an agronomist, and the final member is a minister.

“The leadership training to us has been extraordinary and helpful. Most important is that we learned to work together for the good of the whole village, not just for a small group of project benefactors. It brought our community, together, as not before. Before the training, the village was divided with many project groups working apart. The training helped us realize we should have had this before, so we could work together. We now feel more capable to work as a team. This is the primary reason we have succeeded with our poultry project.”

When Hope for Haitians conducts initial leadership training with a Leadership Council, it also provides seed money of $1,500 for the council to select and implement a project using what they learned in training. This keeps the training grounded in the task of solving issues for the community. In Viard, the council chose a small poultry project.

“Right after the training ended, we got a project to test the skills we got in training. Nobody has done this before. We are very happy to have people who help us in this way.”

In the villages where we work, there is often more than one aid group or non-profit. Where possible we coordinate and cooperate with those groups. For example we coordinate with Food for the Poor as the contractor for most of our building projects. They have solid on the ground building experience and we can more cost effectively build the homes and community centers partnering with them for construction.

Agency cooperation does not always translate perfectly in on the ground situations. This can lead to misunderstanding and conflict when certain people seek “ownership” of public projects. For example, when the Leadership Council attempted to meet in the Community Center that Hope for Haitians built, they were told they had to move since they were not a Food For the Poor group. This is NOT the position of Food for the Poor. Local officials from Food for the Poor have coordinated with our contacts to quash this erroneous perception.

Several of our Leadership Council members mention “trouble” or “threats” in their comments. For the sake of transparency we include those remarks. We want the record to be clear. The actions referred to relate to one individual asserting something untrue, not an official representative of Food for the Poor.

“I want to say thank you to the trainers for getting us together as a community. Training helped to get us to work as a team, as we have not before. We had several things going in the village – but we needed to come together to succeed at a project. You must know, it is hard to do this working together, because people have threatened us about working on this project.”

“Nothing is perfect, but these trainers are qualified to train us. It has been very beneficial. I can now train other people, from what I have learned. Regardless the threats from others, we will do whatever it takes to continue in this work.”

“We must apologize for the trouble you experienced. We welcome you, despite such trouble. This program is only positive for our village. I have experience working in conflict management, and I will work so that next time you come there is not this trouble.”

“We have been thirsty for this type of training. The idea of bringing people together who are involved in different projects so we can share ideas is what we have needed. We have learned to work as a team. As a teacher, I know the importance of learning and this training has taught us much.”

This feedback helps guide us in our desire to build up Communities in Haiti and provide opportunities for self direction and locally guided development.

Shop for Gifts that Change Lives